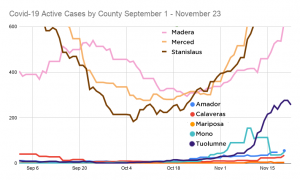 21 previously isolated cases were released from isolation today. There are 258 active cases, 525 recovered and 806 total.

The Optum/LHI state test site at the Mother Lode Fairgrounds will increase their capacity beginning next week to help meet the increasing demand for testing. Starting on Wednesday, December 2 there will be two testing lanes instead of one on Wednesdays through Saturdays and at least one lane will be available seven days a week. Appointments are still required and are available several days in advance, so we recommend checking occasionally for appointments as they become available. Make your appointment at www.lhi.care/covidtesting or by calling (888) 634-1123.

Mariposa, a county with about three times less population than Tuolumne County (17,795 to 52,351) has been reporting 4 active cases when 4 new cases were reported on Friday and then 7 more on Saturday.  Their active COVID-19 cases have jumped to 15 which ties with an outbreak we reported on here back in May. According to their health officials, “Mariposa remains in the Yellow Tier while we wait for an update from the state. We expect to be moving into the Orange Tier and will share this information as soon as we can.

In mid-October Stanislaus, which the state health department says has a population of 562,303, was able to bring it’s active cases down to the 200 range where Tuolumne County, which has 10 times less population, now has. Stanislaus’s active cases have increased since October to 1,379 active now out of their 20,370 total this year. Only 11% of Stanislaus’s COVID-19 infections have been individuals over 65 but 78%, of COVID-19 deaths were people 65 and over a 16.8% fatality rate for that age group. No one under 25 has died in Stanislaus county, 12 of the deaths have been in people age 25 to 44, 79 deaths or 19% were between 45 to 64. Preliminary 2020 demographic data for Stanislaus reports through the end of October there were 8,318 births and 4,891 total deaths in the county. Tuolumne has had 432 births and 498 deaths reported so far as detailed here.

Visit our Health Section, under the “Community” tab or keyword: health. All of our Coronavirus updates are here.