The news came as UK Health Secretary Matt Hancock said authorities are considering putting recovering Covid-19 patients into hotels as a “backup plan,” such is the intense pressure being placed on hospitals by the latest surge in infections.

The UK marked its second deadliest day since the start of the pandemic on Tuesday, with 1,243 new coronavirus-related deaths. It also reported 45,533 new cases, bringing the total case number to 3,117,882.

England entered its third national lockdown last week as it battles to cope with the spread of a new, more contagious variant of the coronavirus. The UK government and senior health officials have warned that many hospitals are on the verge of being overwhelmed.

At a news conference Monday, Hancock said the variant was “putting the NHS [National Health Service] under very significant pressure,” with Covid-related hospital admissions up 22% on just the previous week.

The study — which has not yet been peer reviewed — was published Wednesday by researchers at King’s College London. It analyzed the responses to an anonymous online survey in June and July of more than 700 doctors and nurses working in intensive care units (ICUs) across six different hospitals.

Although nearly 60% of respondents reported good well-being, the study found that almost half of ICU staff reported symptoms consistent with a probable diagnosis of PTSD, severe depression or anxiety, or problem drinking.

Almost one in seven (13.4%) of ICU staff reported frequent thoughts of being better off dead, or of hurting themselves in the past two weeks.

Nursing staff were more likely to report higher levels of distress than doctors or other clinical staff, the researchers found. Almost half of those who completed the surveys were nurses and just over 40% were doctors. The researchers found that doctors consistently reported better health than nurses.

The study, led by Neil Greenberg of the Institute of Psychiatry, Psychology and Neuroscience at King’s College London, was published online in the journal Occupational Medicine.

“Our results highlight the potential profound impact that Covid-19 has had on the mental health of frontline UK staff,” the study says.

“(The) probable PTSD rate we report was around nine times that found within the general population and more than double that found in recent combat veterans.”

Greenberg
tweeted that the study “shows clearly that many ICU staff are understandably having a very tough time.” He urged them not to feel stigmatized and to seek free help if needed through the NHS.

The researchers note that ICU staff have experienced many stressors during the pandemic, including staff shortages, fears of contracting the virus and endangering their loved ones, concerns over a lack of personal protective equipment, and distress relating to the loss of patient lives despite their best efforts.

Staff ‘burnt out and exhausted’

Psychotherapist and author Owen O’Kane, who previously worked as an NHS clinical lead for mental health and as a palliative care nurse, said he was not surprised by the study’s findings although they were “quite shocking” to read. 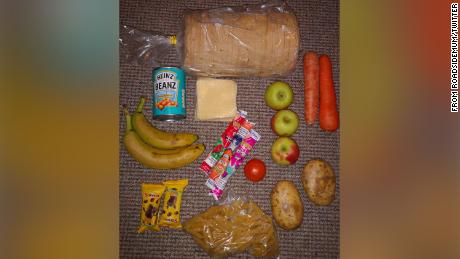 “It’s been a relentless year so it didn’t surprise me that staff are struggling,” he told CNN.

“You’ve clearly got a lot of staff burnt out and exhausted just purely because of what they are up against every day.”

O’Kane, author of “Ten to Zen,” noted that the survey was done last summer, adding: “If they interviewed people now, they would probably find that those statistics would be worse than the ones that we’ve seen.”

He also observed that it was unusual for PTSD to develop as soon as in those surveyed. “Because people are being continually exposed to trauma, you are seeing PTSD symptoms coming earlier,” he said. “When this is finished and we get some degree of normality back in their lives… I do think we will see a significantly higher amount of PTSD symptoms emerging.”

O’Kane said it was important for health care workers to look after themselves, using simple methods like meditation, going for walks and talking with colleagues, friends or family.

And he urged anyone suffering PTSD symptoms to not hang back from seeking professional help. “The quicker you get help, the sooner you’ll recover and the more you’ll function,” he said.

The study’s findings will only increase concern over the stress being placed on NHS staff in England as they struggle to treat record numbers of patients with Covid-19.

Hancock said Wednesday that putting Covid patients into hotels was being considered as a “backup plan” by the country’s authorities but that it was “obviously not what I want to do.”

“We are considering all the options, it isn’t something that we’re actively putting in place. But I would say that it would only ever happen if that was clinically right for any individual patient,” Hancock told the BBC. 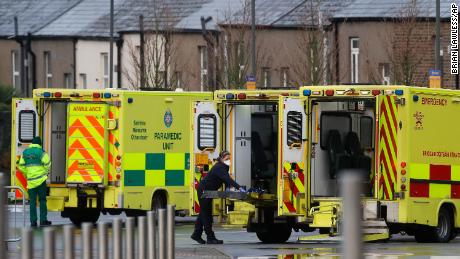 “There is a lag from the number of cases, through to the number of people turning up in hospital. So we know that those pressures on the NHS are going to continue to build over the next couple of weeks,” he added.

Hancock said the temporary Nightingale hospitals set up by NHS England amid the first wave of the pandemic were there as a fallback for hospitals.

Asked about what kind of patients would be sent to hotels, the Health Secretary said it “would be for step-down patients or patients who have been in hospital, who no longer need the full hospital treatment but aren’t quite ready to go home.”

London and southeast England are among the areas worst affected by the new variant, although it has now spread across the UK and has been detected in at least 50 more countries, including badly-hit Ireland.

Scotland’s First Minister Nicola Sturgeon said Wednesday that tougher restrictions would be imposed there from Saturday to try to control the spread of the variant, which accounts for 60% of new cases in the country.

Sturgeon said the stricter measures, including a ban on people entering restaurants or cafes to collect takeout, would crucially “stop people from meeting and interacting indoors and outdoors.”

London Mayor Sadiq Khan on Friday declared a “major incident” in the English capital “due to the rapid spread of the coronavirus … and the increase of Covid-19 cases in hospitals, which has left the NHS at risk of being overwhelmed.”

The UK government is pinning its hopes of bringing the crisis under control on a mass Covid-19 vaccination drive.

“So far across the UK, we’ve given 2.6 million doses to 2.3 million people, and we’ve protected more people through vaccinations than all the countries in Europe put together,” Hancock said at a Downing Street press briefing Monday.

Hancock said the UK was on track to deliver a first dose of the vaccine to “everyone in the top four cohorts” — which account for 88% of Covid-19 related deaths — by February 15. Those groups encompass all elderly care home residents and staff, all those aged 70 and over and frontline health and social care workers.

Two-fifths of over-80s and almost a quarter of older care home residents had received a first dose of the coronavirus vaccine as of Monday, Hancock said.